How cooperative processes communicate with each other? Explain methods of Inter process communication(IPC).

Processes can then exchange their information by reading and writing data to the shared region. In the message-passing model, communication takes place by means of messages exchanged between the cooperating processes. The two communications models are contrasted in the Figure below. Both of the models are mentioned, common in operating systems, and many systems implement both. Message passing is needful for exchanging smaller amounts of data because no conflicts need be avoided. It is also easier to implement in a distributed system than in shared memory. Once shared memory is initiated, all accesses are treated as routine memory accesses, and no assistance from the kernel is required. It suffers from cache coherency issues, which arise because shared data migrate among the several caches. Since the number of processing cores on systems increases, it is possible that we will see message passing as the preferred mechanism for IPC. 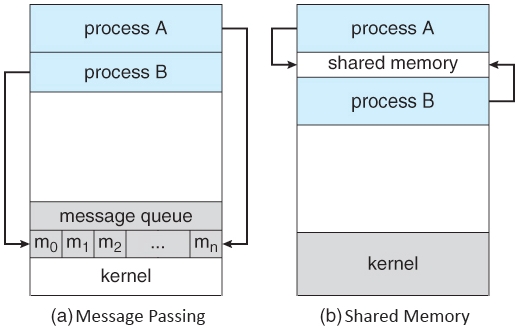