The interface between a process and an operating system is provided by system calls. In general, system calls are available as assembly language instructions. They are also included in the manuals sed by the assembly level programmers. System calls are usually made when a process in user mode requires access to a resource. Then it requests the kernal to provide the resource via a system call. A figure representing the execution of the system call is given as follows: 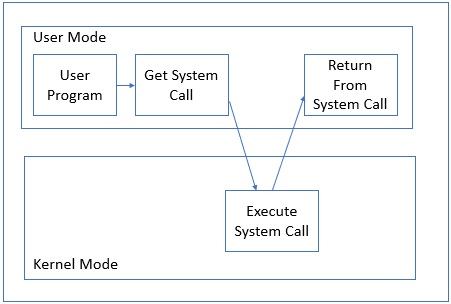 As can be seen from this diagram, the process execute normally in the user mode until a system call interrupts this. Then  the system is executed on a priority basis in the kernal mode. After the execution of system call, the control returns to the user mode and execution of user processes can be resumed. In general, system calls are required in the following situations: