Error correction is more difficult than error detection. Error correction codes are used to detect and correct errors when transmitting data from the sender to the receiver. It can be done in two ways:

CRC technique involves binary division of the data being sent. The divisor is generated using polynomials. The sender performs a division operation on the bits being sent and calculates the remainder. Before sending the actual bits the sender adds the remainder at the end of the actual data bits.

Actual data bits plus the remainder is called a codeword.

The sender transmits data bits as a codeword.

At the other end, the receiver performs division operations on the codewords using the same CRC divisor. If the remainder contains all zeros, the data bits are accepted, otherwise, it is considered as some data corruption that occurred in transit.

FCS R = to be calculated 5 bits

5 zeros are added to the actual data bits.

The product is divided by P. 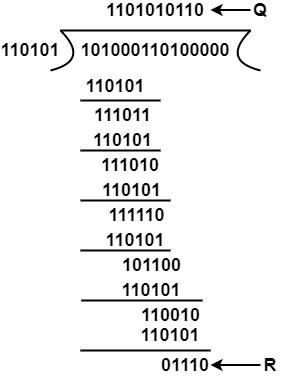 Suppose that there are no errors, and the receiver gets T perfect. The received frame is divided by P. 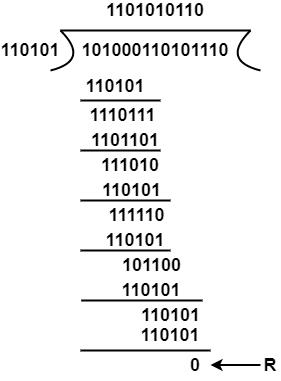 Because of no remainder, there are no errors.