Define admissible heuristic with an example. Explain the working mechanism and limitations of hill climbing search.

For a heuristic to be admissible to a search problem, needs to be lower than or equal to the actual cost of reaching the goal.

Here is an example:

In the A* search algorithm, the evaluation function (where {\displaystyle n}n is the current node) is:

Here, h(n) gets calculated with the use of the heuristic function. If a non-admissible heuristic was used, it is possible that the algorithm would not reach the optimal solution because of an overestimation in the evaluation function.

A hill-climbing algorithm is a local search algorithm that moves continuously upward (increasing) until the best solution is attained. This algorithm comes to an end when the peak is reached.

This algorithm has a node that comprises two parts: state and value. It begins with a non-optimal state (the hill’s base) and upgrades this state until a certain precondition is met. The heuristic function is used as the basis for this precondition. The process of continuous improvement of the current state of iteration can be termed as climbing. This explains why the algorithm is termed as a hill-climbing algorithm.

A state-space diagram provides a graphical representation of states and the optimization function. If the objective function is the y-axis, we aim to establish the local maximum and global maximum.

The following diagram shows a simple state-space diagram. The objective function has been shown on the y-axis, while the state-space represents the x-axis. 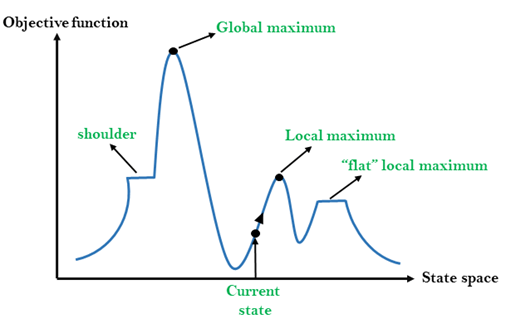 A state-space diagram consists of various regions that can be explained as follows;

There are three regions in which a hill-climbing algorithm cannot attain a global maximum or the optimal solution: local maximum, ridge, and plateau.

At this point, the neighboring states have lower values than the current state. The greedy approach feature will not move the algorithm to a worse off state. This will lead to the hill-climbing process’s termination, even though this is not the best possible solution.

This problem can be solved using momentum. This technique adds a certain proportion (m) of the initial weight to the current one. m is a value between 0 and 1. Momentum enables the hill-climbing algorithm to take huge steps that will make it move past the local maximum.

In this region, the values attained by the neighboring states are the same. This makes it difficult for the algorithm to choose the best direction.

This challenge can be overcome by taking a huge jump that will lead you to a non-plateau space. 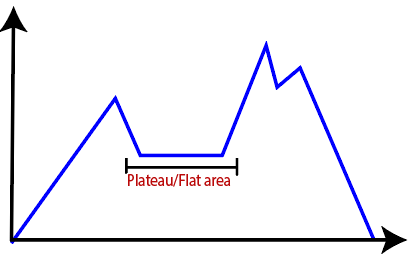 The hill-climbing algorithm may terminate itself when it reaches a ridge. This is because the peak of the ridge is followed by downward movement rather than upward movement.

This impediment can be solved by going in different directions at once. 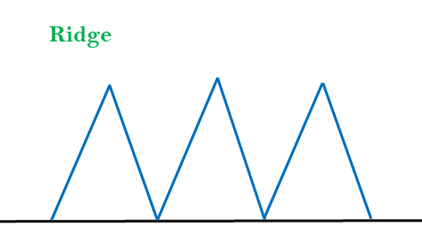