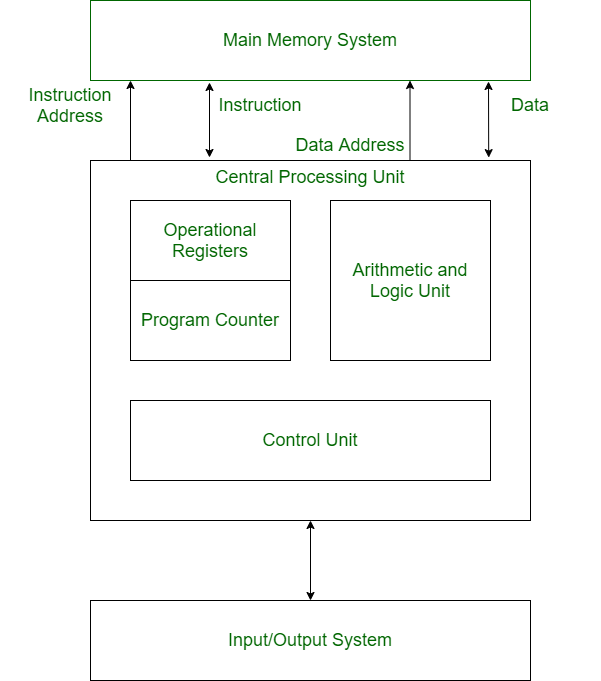 Buses are used as signal pathways. In Harvard architecture, there are separate buses for both instruction and data. Types of Buses:

It has the location of the next instruction to be executed. The program counter then passes this next address to the memory address register.

The arithmetic logic unit is that part of the CPU that operates all the calculations needed. It performs addition, subtraction, comparison, logical Operations, bit Shifting Operations, and various arithmetic operations.

The Control Unit is the part of the CPU that operates all processor control signals. It controls the input and output devices and also controls the movement of instructions and data within the system.

In practice, Modified Harvard Architecture is used where we have two separate caches (data and instruction). This is common and used in X86 and ARM processors.

GDT, Global Descriptor Table, is used to define the characteristics of the various memory areas used during program execution, including the base address, the size and access privileges like executability and writability. These memory areas are called segments in Intel terminology. (From Wikipedia) Segment is a term for memory management in Intel x86 architecture, which is also used collaboratively with paging mechanism.

LDT, Local Descriptor Table, acts similar to GDT, which also saves segments descriptor. The main differences between GDT and LDT is: 1) GDT have only one copy in system while LDT can have many, 2) GDT may not changed during execution which LDT often changes when task switches, 3) entry of LDT is save in GDT. Entries in GDT and LDT have the same structure.